A number of professors in the Department of Sociology have released  books in the second half of 2020. Congratulations to Professors Cassi Pittman Claytor, Heather McKee Hurwitz, and Timothy Black! 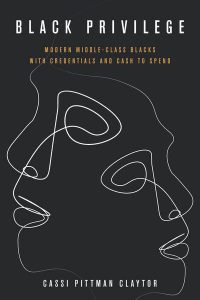 New York City has the largest population of black Americans out of any metropolitan area in the United States. It is home to a steadily rising number of socio-economically privileged blacks. In Black Privilege Cassi Pittman Claytor examines how this economically advantaged group experiences privilege, having credentials that grant them access to elite spaces and resources with which they can purchase luxuries, while still confronting persistent anti-black bias and racial stigma.

Drawing on the everyday experiences of black middle-class individuals, Pittman Claytor offers vivid accounts of their consumer experiences and cultural flexibility in the places where they live, work, and play. Whether it is the majority white Wall Street firm where they’re employed, or the majority black Baptist church where they worship, questions of class and racial identity are equally on their minds. They navigate divergent social worlds that demand, at times, middle-class sensibilities, pedigree, and cultural acumen; and at other times pride in and connection with other blacks.

Rich qualitative data and original analysis help account for this special kind of privilege and the entitlements it affords—materially in terms of the things they consume, as well as symbolically, as they strive to be unapologetically black in a society where a racial consumer hierarchy prevails. 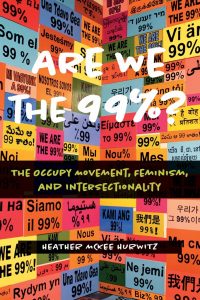 Are we the 99%? The Occupy Movement, Feminism, and Intersectionality by Heather McKee Hurwitz from Temple University Press.

The protestors that comprised the Occupy Wall Street movement came from diverse backgrounds. But how were these activists—who sought radical social change through many ideologies—able to break down oppressions and obstacles within the movement? And in what ways did the movement perpetuate status-quo structures of inequality?

Are We the 99%? is the first comprehensive feminist and intersectional analysis of the Occupy movement. Heather McKee Hurwitz considers how women, people of color, and genderqueer activists struggled to be heard and understood. Despite cries of “We are the 99%,” signaling solidarity, certain groups were unwelcome or unable to participate. Moreover, problems with racism, sexism, and discrimination due to sexuality and class persisted within the movement.

Using immersive first-hand accounts of activists’ experiences, online communications, and media coverage of the movement, Hurwitz reveals lessons gleaned from the conflicts within the Occupy movement. She compares her findings to those of other contemporary protest movements—nationally and globally—so that future movements can avoid infighting and deploy an “intersectional imperative” to embrace both diversity and inclusivity. 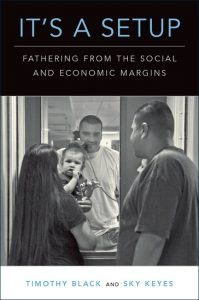 It’s A Setup: Fathering from the Social and Economic Margins by Timothy Black and Sky Keyes from Oxford University Press.

The expectation for fathers to be more involved with parenting their children and pitching in at home are higher than ever, yet broad social, political, and economic changes have made it more difficult for low-income men to be fathers. In It’s a Setup, Timothy Black and Sky Keyes ground a moving and intimate narrative in the political and economic circumstances that shape the lives of low-income fathers. Based on 138 life history interviews, they expose the contradiction that while the norms and expectations of father involvement have changed rapidly within a generation, labor force and state support for fathering on the margins has deteriorated. Tracking these life histories, they move us through the lived experiences of job precarity, welfare cuts, punitive child support courts, public housing neglect, and the criminalization of poverty to demonstrate that without transformative systemic change, individual determination is not enough. Fathers on the social and economic margins are setup to fail.