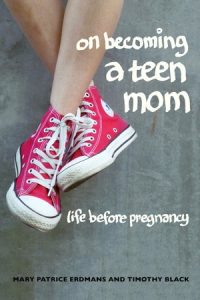 On Becoming a Teen Mom: Life Before Pregnancy

In this book, we examine the life stories of 108 white, Latina, and black teen mothers. Following their life trajectories from childhood through schools, relationships, and family trauma, we tell the backstories to the early childbirth, arguing that focusing on the early birth distracts us from looking at systemic problems embedded in gender, class, and racial/ethnic inequalities. The book organizes the life stories around thematic trajectories – very young mothers, child sexual abuse, interpersonal violence, school dropout, and contraception and abortion. Each chapter begins with one or two life stories and then weaves concrete first-person accounts with interpretive third-person analyses to show how structural inequalities are manifest in individual biographies. The life stories and our interpretations challenge historical narratives of blame and shame often used to explain teen births and shape public policy. We use a critical paradigm to understand how the organization of power and domination shaped the trajectories of these young mothers by examining the intersecting grooves of patriarchy, poverty, and racism. We argue that strategies are needed on three levels: the larger structural level where inequalities of power shape resources, opportunities, and moral orders; the interpersonal, more immediate level, where parenting occurs; and the organizational level–the schools and workplaces–where we can chart more effective public policies to support families and children. 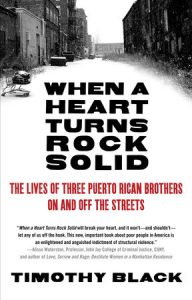 When a Heart Turns Rock Solid: The Lives of Three Puerto Rican Brothers On and Off the Streets

Tim’s book is based on an 18-year ethnographic study of a network of Puerto Rican (mostly) men from Springfield, Massachusetts. The breadth of his study is unprecedented in sociology and provides the opportunity to examine the intersections of larger structural changes and individual changes over the past 20 years, a key historical period because of the effects of neoliberalism on marginalized communities. The book is based upon relationships that he developed with a network of men whom he followed into a variety of social spaces — city schools, the drug trade, formal and informal low-wage jobs, the trucking industry, prisons, and drug treatment programs. The analysis takes a Millsian approach (C. Wright Mills) by demonstrating how larger social structures are lived. Identified as one of best books of 2009 by The Washington Post, it won the 2010 Mirra Komarovsky book award from Eastern Sociological Society, the 2010 book award from Association of Humanist Sociology, and was selected as a finalist by the Puerto Rican Studies Association for their 2010 book award.